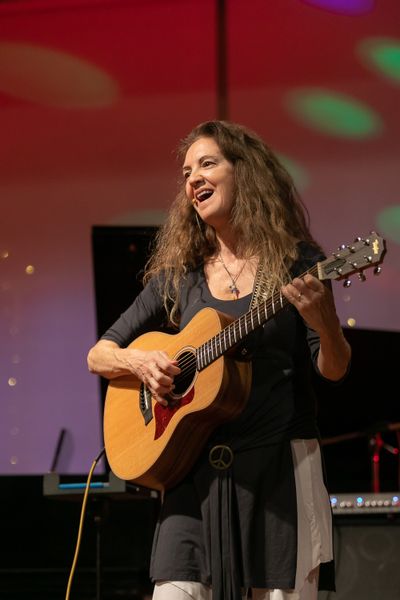 Born and raised in Philadelphia, Yvette has a diverse background. Coming from a family of exiled Jews out of Egypt, Yvette traveled as a child and was exposed to many different cultures. In each, she heard the song of the divine and saw the common thread that connects us.

Upon college graduation with a BA in Theater Interpretation from Northwestern University, Yvette enjoyed an extensive career in Musical Theatre. Among her most memorable roles are Christine Dae in “The Phantom of the Opera” and the one-woman play “Hannah Sennesh,” about an Israeli heroine during World War II. While living in Manhattan she co-wrote a rock musical “Atom & Eve – The Second Desert Sky” about lost teenagers on a spiritual quest for paradise. Atom & Eve bore its first incarnation at the Westbeth Theatre under the direction of Tom O’Horgan of Jesus Christ Superstar.

In her mid-twenties, she happened upon Paramahansa Yogananda’s “Autobiography of a Yogi.” An inner recognition burst free. Every page rang familiar and sang to her.

Yvette became certified in 2003 with Kali Ray in TriYoga and is a Hatha Yoga RYT with Yoga Alliance. Her favorite readings: The Upanishads, The Bhagavad Gita, Siddhartha, The Yoga Sutras of Patanjali commentary by Sri Swami Satchidananda, and Who Am I by Ramana Maharshi.

She released her concept album “The Song of Breath” co-produced with Ben Leinbach and featuring chant artists Girish and Benjy Wertheimer in 2013; Her Kirtan CD debut “Into the Arms of Love” featuring David Newman in 2010 was co-produced with Frank Wolf, both received with much acclaim.

In 2016  “We Are One” was released featuring Girish and the Philadelphia Boys Choir, followed by September of 2018  the Divinely inspired “Divine”  both co-produced with the legendary Ben Leinbach, and produced her most recent recording "Ma" in 2020.

Yvette has recorded with Gaura Vani, Girish, David Newman and has shared the Kirtan stage with Russill Paul, author of “The Yoga of Sound.”

She teaches Hatha yoga at her community center in Newtown Square, PA, offers private/group healing sound sessions, is a harmonium/vocal/mantra coach and a numerologist.

An activist for LBBC’s Living Beyond Breast Cancer events, Yvette offers sacred music at the Annual “Yoga on the Steps – Reach & Raise” Living Outdoor Expos. She also blogs and has a UTube channel with Reach & Raise co-founder Jennifer Schelter titled Let’s Talk About Your Dreams; An extension of her passion for connection in the community.

She is married to her beloved Christopher and they share their home with their two beautiful daughters and two-spirited dogs under the ‘Oneness’ umbrella of Mata Amritanandamayi also known as Amma.

Looking for more info on the Bhakti Retreat?